Tucked away on the Pembrokeshire peninsula, a jagged finger of rock pointing the way to Ireland, is Britain’s smallest city, St. David’s.

You see first a small collection of houses and cottages and then suddenly revealed, set in a hollow to avoid the attentions of early Viking marauders, is the beautiful and historically important St. David’s cathedral, originally founded in the 6th Century and said to house the remain

s of the patron saint of Wales.

It was believed in the middle-ages that three visits to St. David’s were worth one visit to Rome, which made it a busy centre of pilgrimage from Ireland and Wales. You can see the poor seasick pilgrims crossing from Ireland to visit St. David’s carved underneath the stall seats. These small ledges are called misericords or ‘mercy rests’ and were used by the canons to prop themselves up, giving the impression that they were standing during the long services. 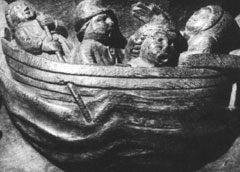 Hidden away under the seats they were a good excuse for the local carvers to enjoy their craft. You will find a wolf in a monk’s cowl, two boat builders with backache and a rather sinister pre-Christian ‘green man’.

The building you see today is the culmination of centuries of rebuilding and extension, and contains a wealth of architectural and historical detail. Look out for the Bishop of Abraham’s Celtic Cross and the marble dog! The bell tower and old Portcullis gate in the Cathedral walls always fascinate children and often on Sundays and special occasions you can hear the bells being rung. 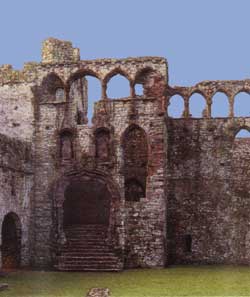 Next to the Cathedral is the atmospheric skeleton of the Bishop’s Palace which some historians consider to be architecturally superior to the Cathedral, but blighted during the Reformation when lead was stripped from the roof and sold to provide a dowry for a Bishops daughter.

Within an easy walk of this gem of a city is the lovely cliff top setting of St. Non’s chapel and well, said to be the birthplace of St. David.

The chapel is dedicated to St.David’s mother, Saint Non, and the well outside is reputed to have sprung up during a thunderstorm at the birth of her son.

Pilgrims who were understandably nervous at the prospect of a sea crossing to Ireland, or a long walk to the other religious sites of Wales, would come to pray and take the water at this beautiful spot. As late as the 19th century the crystal clear water was sought as cure for everything from rheumatism to eye complaints.

Continue your walk out to the coastal path and you could be walking in the same century as the pilgrims with only the sea birds, seals and occasional dolphins for company. 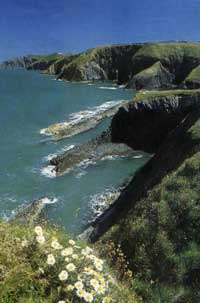 Salisbury Cathedral from the Meadows