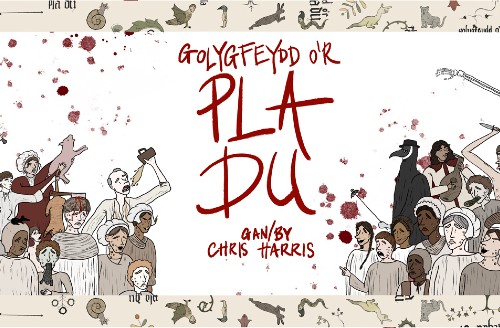 Theatrau Sir Gâr is set to produce its first full in-house production which will tour to venues across Wales in spring 2023.

Set at the time of the plague, Golygfeydd o’r Pla Du, is described as a mischievous, black (death) comedy, packed with scandal and songs which pokes fun at those who seek to gain from crisis.

This Welsh language comedy is written and directed by Chris Harris, a dramatist and translator from Cwmbrân, living in Bridgend. The play has been in development with Theatrau Sir Gâr, part of Carmarthenshire County Council, for the past two years.

Golygfeydd o’r Pla Du will open in the Ffwrnes Theatre, Llanelli on May 4th before touring to venues across Wales. The tour will close in another Theatrau Sir Gâr venue, The Lyric in Carmarthen on May 26th.

Cabinet Member Councillor Gareth John said: “We’re delighted that Golygfeydd o’r Pla Du will be the very first home-grown production for Theatrau Sir Gâr. This year marks the 10th anniversary for the Ffwrnes Theatre so it’s especially exciting that this new production will open at the Ffwrnes. It’s been two years in development which has been challenging at times due to the pandemic, but the creative team has pulled together and succeeded in creating something really special. We can’t wait to share this with audiences across Wales.”

The play’s writer and director, Chris Harris says: “I’m very excited to be presenting a dark comedy with a subtle underbelly rooted in our changing behaviour during the pandemic. But the key argument must not be lost– that when crisis calls, there are individuals that gain from the misfortune of others. The play will speak to audiences – figuratively and literally! We will give the audience an outrageous experience – one that takes them to a completely different world in order to reflect – as well as laugh – at ourselves and our changing behaviour over the past two years.”

Auditions are taking place this month with the cast due to be announced in early February.

Golygfeydd o’r Pla Du is a Welsh language production, suitable for ages 14+. Theatr Genedlathol Cymru’s Welsh language access app, Sibrwd, will be available at every performance, meaning audiences can enjoy this performance regardless their level of fluency in Welsh.

Tickets for all dates on the tour are on sale now, details of all venues on the tour can be found below and by visiting the Theatrau Sir Gâr website here: www.theatrausirgar.co.uk/en/golygfeydd-or-pla-du-on-tour

11 May, Parc and Dare, Treorchy

Do you want to write an article or blog for www.magazine.wales or any of the news websites for Wales? Contact us.  Email: [email protected]